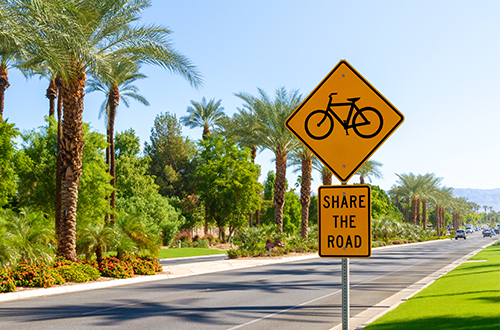 Electric bikes are both fun and functional. They get you where you need to go, keep you engaged with your environment, and encourage you to exercise. They’re also economical and environmentally friendly. For this reason, many California residents are adding eBikes to their routine. With eBike use continuing to rise, California lawmakers have now established a set of rules and regulations for electric bike riders. These eBike laws intend to encourage residents to use their electric bikes while also keeping riders (and the people around them) safe.

eBikes fall under the umbrella of two-wheel vehicles. Electric bikes are defined as “low-speed bicycles equipped with fully operable pedals and an electric motor of less than 750 watts.” The DMV uses 3 different classifications for eBikes:

Pedal-assisted electric bicycles that help riders reach 20mph. The motor only assists the rider during active pedaling and ceases after max speed is reached.

Throttle-assisted electric bicycles with motors that exclusively propel the bike up to a max speed of 20mph.

Pedal-assisted electric bicycles that help riders reach 28mph. The motor only assists the rider during active pedaling and ceases after max speed is reached. These bikes also include a speedometer.

Are There Age Restrictions on Electric Bikes?

Since class 1 and 2 eBikes are treated almost the same as regular bicycles, they have no age restrictions. Class 3 eBikes, however, are restricted to riders 16 years of age or older. This is because class 3 eBikes can reach greater speeds.

Do You Need a License or Registration for an Electric Bike?

No. All electric bicycles are exempt from typical motor vehicle requirement laws. You don’t need to have a driver’s license, license plate, or motor vehicle insurance.

Where is it Legal to Ride an Electric Bike?

You can ride all classes of eBikes on regular roads, as long as you remain as far right as possible. You can also utilize bike lanes and bike routes if it is allowed in your specific area. It is illegal to take an electric bike on a freeway or expressway if there are “bicycles prohibited” signs posted. You can ride class 1 and 2 electric bikes on bike paths and trails. Class 3 eBikes, however, are not allowed on these paths.

It’s important to practice safety while riding your eBike. All classes of eBikes must abide by the rules of the road and bicycle safety laws. This includes wearing a helmet if you are under 18, having functional breaks, and using lights and reflectors at night. Additionally, class 3 eBikes are prohibited from transporting additional passengers.

At eRyde Electric Bikes LA, we know all there is to know about eBikes, from laws and safety to technical specifications. Our experts can provide guidance about which eBike you should buy and how to ride it properly. Get in touch with one of our Bike Advisors or Bike Techs to learn more, or visit our showroom to give our electric bikes a test drive!