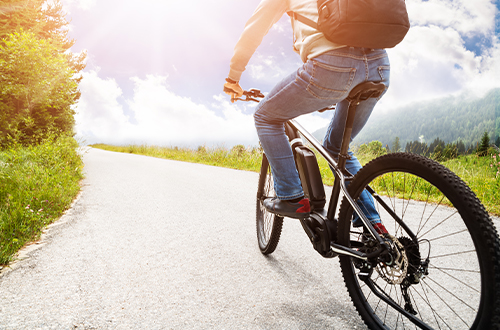 Electric bicycles are the latest craze in alternative transportation. As cities remain densely populated and pollution continues to impact climate change, innovators are looking for new ways to reduce our carbon footprint. Though public transportation has helped, it still contributes to carbon emissions. Electric bikes provide a unique solution, allowing riders to reach speeds of 28 mph without the licensing and insurance requirements that come with other motorized vehicles. But are they really as environmentally friendly as they appear? We are confident that our electric bicycles will put us on a positive path towards sustainability. Here’s why:

Why Electric Bikes Are Good for the Environment

Most forms of transportation rely on fossil fuels which release damaging carbon emissions into the atmosphere. Since eBikes rely on electricity instead of gasoline or diesel, they produce 0% emissions. According to a study published in “Transportation Research Part D: Transport and Environment,” we can reduce carbon emissions by 12% if just 15% of the urban population switches to eBikes.

Since they don’t produce emissions, they also don’t contribute to air pollution. Smog is a big issue in cities, leading to respiratory issues and problems with visibility. Air pollution also creates an unhealthy environment for plants and animals. If electric bike use increases, air pollution will subsequently decrease.

eBikes don’t require nearly as much maintenance as other vehicles; therefore, they produce less waste. You don’t need to constantly change oil and expensive parts, things that increase our carbon footprint. Electric bikes are also equipped with long-lasting lithium-ion batteries that only occasionally need replacing. When the batteries do die, they can be recycled or thrown out. Either way, they won’t pollute landfills with dangerous lead the same way that other batteries do.

How To Enhance the Sustainability of Electric Bikes

Since eBikes rely on electricity to run, they will draw energy from the power grid. However, you can reduce the strain on this system by charging during off-peak hours. Plug your battery in later in the day when fewer people are using electricity. You’ll be able to draw from the excess energy that has already been generated throughout the day without overwhelming the power grid. As an added benefit, you’ll also endure lower rates at off-peak hours.

For maximum sustainability, you can charge your battery with power generated from solar panels. If you don’t have access to solar energy where you live, you can purchase portable solar chargers for your eBike. Simply connect your charger to the panel to experience clean, free energy.

The motors in electric bicycles are designed to assist your pedaling, not replace them altogether. The more you use your feet to propel the bike, the less energy you’ll drain from the battery. Also, additional exercise will enhance your health, possibly reducing the strain on our medical system as well as pharmaceutical use.

Choose Your eBike Over Other Modes of Transportation

The best way to increase the sustainability of your eBike is to use it! Though some may purchase an electric bike to use for fun on their off time, it’s even better to use it as a primary source of transportation. It’s obvious that an electric bicycle is greener than a car or motorcycle but did you know that it’s also 6x more efficient than riding a train? That makes an eBike more environmentally friendly than both commuter rails and buses.

Help Save the Environment With Electric Bikes LA

Whether you live in the urban parts of Los Angeles or in the outskirts, you can make a difference in the world by purchasing an eBike from Electric Bikes LA. When you choose an electric bicycle as your primary or supplementary source of transportation, you are doing your part to fight the impact of climate change. Our experienced Bike Advisors can walk you through all of our in-store makes and models as well as suggest custom order eBikes designed to fit your needs. You can even give one a test ride. Make a positive change today to find the best electric bike for you.